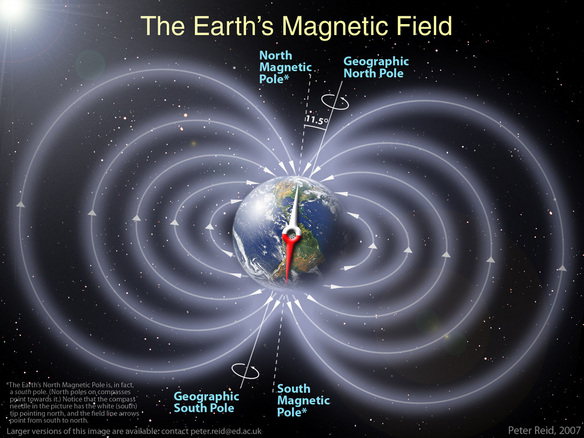 Earth has two geographic poles: the North Pole and the South Pole. They are the places on Earth's surface that Earth's imaginary spin axis passes through. Our planet also has two magnetic poles: the North Magnetic Pole and the South Magnetic Pole. The magnetic poles are near, but not quite in the same places as, the geographic poles. The needle in a compass points towards a magnetic pole.
Sometimes Earth's magnetic field even flips over! The North and South Magnetic Poles trade places. This doesn't happen very often; usually at least a few hundred thousand years pass between these flips.

Speaking of flipping, did you know that Earth's North Magnetic Pole is actually a south pole? Huh, what? When compasses were first invented, people noticed that one end of the compass pointed towards the North. They called the end of the compass needle that pointed North the "north end" of the needle (makes sense!). Later, people learned more about magnets. They learned that like ends (a north and a north OR a south and a south) push away from each other. They learned that opposite ends (such as a north and a south) pull toward each other. The needle of a compass is a tiny bar magnet. The north end of the needle is pulled toward Earth's North Magnetic Pole. So the North Magnetic Pole is actually the south pole of Earth's magnetic field. Doesn't that just make your brain ache!